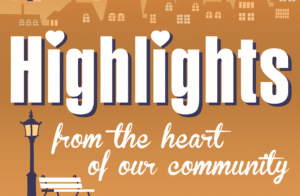 Highlights: From the Heart of Our Community, is a 30 minute weekly TV show featuring organizations, events, grass-roots efforts and people who move our state and community forward in a positive way.
The show is a collaboration with Kanawha County Schools, Suddenlink Communications and Jim Strawn & Company.
The show airs daily at 8:30 a.m. and 8:30 p.m. on Suddenlink’s channel 17.
The show airing September 11, 2017 – September 18, 2017 ‘highlights’ Conquer Chiari and FOOTMAD.
We interviewed Malisa Turner and Kathy Kent, Co-Chairs of Conquer Chiari Walk scheduled for September 23, 2017 beginning at 8:30 a.m. on the campus of WV State University.
Malisa explained that Chiari is a neurological disorder where part of the brain, the cerebellum (or more specifically the cerebellar tonsils), descends out of the skull into the spinal area. This results in compression of parts of the brain and spinal cord, and disrupts the normal flow of cerebrospinal fluid, a clear fluid which bathes the brain and spinal cord.
Kathy talked about her lifelong struggles living with Chiari. She has had 10 procedures to help alleviate some of the symptons of Chiari. 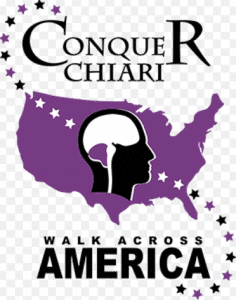 Because Chiari involves the nervous system, symptoms can be numerous and varied. In fact, one large study showed that the vast majority of Chiari patients reported 5 or more symptoms, and 49 distinct symptoms were reported by 2 or more patients. Despite this variety, the most common Chiari symptom, and the hallmark of the disease, is a headache. Usually, the Chiari headache is described as an intense pressure in the back of the head and is brought on, or aggravated, by exercise, straining, coughing, sneezing, laughing, bending over, or similar activities. Other common symptoms include balance problems and fullness in the ears. In very young children, trouble swallowing is one of the most frequent symptoms. When thinking about symptoms, it is also important to keep in mind that once a person’s health is compromised in one way (with Chiari for example), secondary problems are more likely to develop, especially if a person is in chronic pain. Research has shown that people with chronic pain are much more likely to develop other chronic conditions, so not every symptom may be a direct result of a Chiari Malformation.
Malisa talked about the upcoming 10th Annual Conquer Chiari Walk scheduled for September 23, 2017 beginning at 8:30 at WV State University. They are still accepting walkers, contributions and donations of silent auction items. Contact 304-415-1338 for more information.
Or click here to register.
We also interviewed Becky Park, Manager of FOOTMAD. Kanawha Valley Friends Of Old Time Music And Dance (FOOTMAD) is a non-profit, volunteer organization whose mission is to promote traditional music and dance in Charleston, West Virginia and the Greater Kanawha Valley.

Becky gave us a sneak preview of the upcoming Concert Series and discussed their contra dances as well.
The season kicks-off on October 7, 2017 with Calan and concludes on April 21, 2018 with Trio da Kali. Season tickets are VERY affordable and children 13 and under are FREE to attend the concerts.
Call 304-729-4382 for more information.
If you would like to learn more about the Highlights TV Show, contact Host and Executive Producer Jim Strawn at 304-541-4756.