We interviewed Dana Eddy, co-tournament director of Charleston Public Courts. He discussed the history and how to get involved.

The Tournament started 1959 when Ned Chilton, Publisher of the Charleston Gazette during that era. He wanted to help grow ‘public tennis’ and give all players the opportunity to complete and play.

Back then, if you belonged to a private club you couldn’t play.  The cost to play that first year was only $1.00.

In time, private club players could participate but if you won once you were banned.   They actually put in the paper the banned players.

Today, the tournament is 22 Dollars includes play, t shirt and an awards banquet for winners at the University of Charleston.

The tournament runs from July 12th to Championship Saturday, July 20th. All matches are held at the Schoenbaum Courts in Kanawha City, WV.

Opening night is July 12th. Mayor Amy Goodwin will be joining them for opening night with cookies and refreshments provided by Charleston Convention Bureau.  Past tournament directors and committee members will be present.

Dana talked about the logo for the tournament which was designed by Gazetter humorist, Jim Dent. It hasn’t changed for 60 years.

Susie discussed the structure of the Alliance. Two major engines: Ecomomic & Community Development. Her role focuses on the community development side.

The community development team works diligently to increase our natural and built assets through sustainable and smart growth initiatives.

Their main goals include:

They both discussed all the neat events happening in and around downtown Charleston, WV. 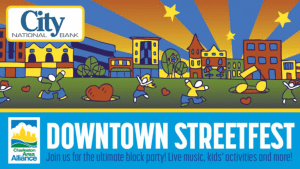 Click here to learn more about the Alliance events.

We hope to see you in downtown Charleston, WV!