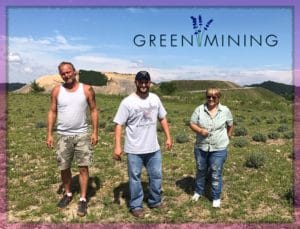 From: Register-Herald
By: Andrea Lannom
The following is article about an old surface mine site becoming a lavender farm and putting West Virginians back to work.
Hernshaw, WV… A small plot of budding lavender overlooks a mostly barren, partly-reclaimed mountainside, contrasting the old and new.
“That’s what it all used to look like before it was reclaimed,” Aaron Smith, of Charleston, said as he pointed to the mountainside.
Smith started out as an intern and now works full-time for the Green Mining Model Business Program, which aims to turn the reclaimed area of the former Pritchard Mine site into “purple mountains.”
As Smith drove his pickup truck over the winding, rough, gravel road to what he and others with the program call the “demo site,” he talked about the company and what he’s learned about lavender.
He mentioned that he uses a ratio of 60 percent sand and 40 percent dirt to grow the plant and said the lavender thrives in a rockier environment, which is why he said the former mine site provides a surprising environment for it to thrive.
“People ask me what I do and I say I grow lavender on a mine site,” he said. “They always respond with ‘what?’”
The demo site alone features about 14 varieties of lavender. Some have a woody, earthy smell and others smell like a sweet perfume. However, this site is a small portion of what the program has.
The Four Mile mine site is owned by the Penn Virginia Corporation, and the miner operator is Pritchard Mining.
Marina Sawyer, Green Mining project coordinator, explained the mine site is 10,000 acres. They have 146 acres prepped for planting and 34 acres already planted.
Sawyer explained the program got its start after getting a $210,000 demonstration grant from the Benedum Foundation so they could demonstrate their vision.
After that, they completed a feasibility study and later received a grant from the Appalachian Regional Commission. They started farming in February.
Sawyer explained how this site, which is on the border of Kanawha and Boone counties, was chosen. She said she approached Decota Consulting Company, which works with mining companies in the state, and explained to them what she wanted to do. She later went to Penn Virginia and talked to them about the project. However, she said it wasn’t until officials from Penn Virginia and Pritchard saw the demo site that she felt they understood the program’s potential.
“Then they began to get the idea. It’s hard to get the vision without seeing it because who thinks of planting such things on basically moon style land?”
So far, they’ve had one harvest in the demo plot in June. They are expecting another harvest in September.
Click here to read FULL article.
Call Green Mining at 304-362-9626 to learn more.